The health crisis that erupted in Cuba due to a Covid-19 outbreak this Sunday generated a series of unprecedented protests in different cities against the government.

“Down with the dictatorship!” it was heard within the slogans transmitted on social networks from towns such as San Antonio de los Baños, Santiago de Cuba and Havana.

The Cuban Foreign Ministry assured this Saturday that it is not necessary to open a humanitarian aid corridor due to the health crisis that the country is experiencing in its worst wave of covid-19, although it recognized that the situation is “Very complex” and urged to donate from abroad through official channels.

The unprecedented demonstration was broadcast live by Facebook users and takes place in the middle of a serious economic and health crisis in the Caribbean country, where there is a worrying lack of food, medicine and other basic products.

“People started screaming, there are horrible blackouts, six hours, this does not stop, and it is every day. They began to walk, very peaceful, all they did was scream. There were a lot of young people ”, A local resident told Efe by phone that she was inside a store at the time of the events.

Efe was also able to confirm the presence of the Cuban president, Miguel Díaz-Canel, in the park of the Church of San Antonio, where he had a conversation with a group of government supporters.

Another source in the area told Efe that the internet service on cell phones was cut off.

THE FEAR WAS LOST! This is the PEOPLE of CUBA !!!! San Antonio de los Baños, Havana. #SOSCuba pic.twitter.com/zRyFtSz8bC

In Havana, calls have been circulated on social networks to demonstrate at points on Malecón avenue, but so far no such protest has been made.

This afternoon, a score of young people – among them the playwright Yunior Aguilera – did gather at the doors of the Cuban Institute of Radio and Television (ICRT), where they called for a protest shouting Cuba suffers! And tell the truth and you can be our parents! In the presence of a strong presence of State Security agents.

They also asked the authorities restore internet service in Havana, which is currently cut off.

Videos from other places have begun to circulate on social networks, such as the eastern town of Palma Soriano (Santiago de Cuba), where hundreds of people have also mobilized in the streets and slogans such as “no more lies” and “no we are afraid”.

Aftershocks of the protests have also been reported in the towns of Guira de Melena and Alquízar, both in the province of Artemisa. 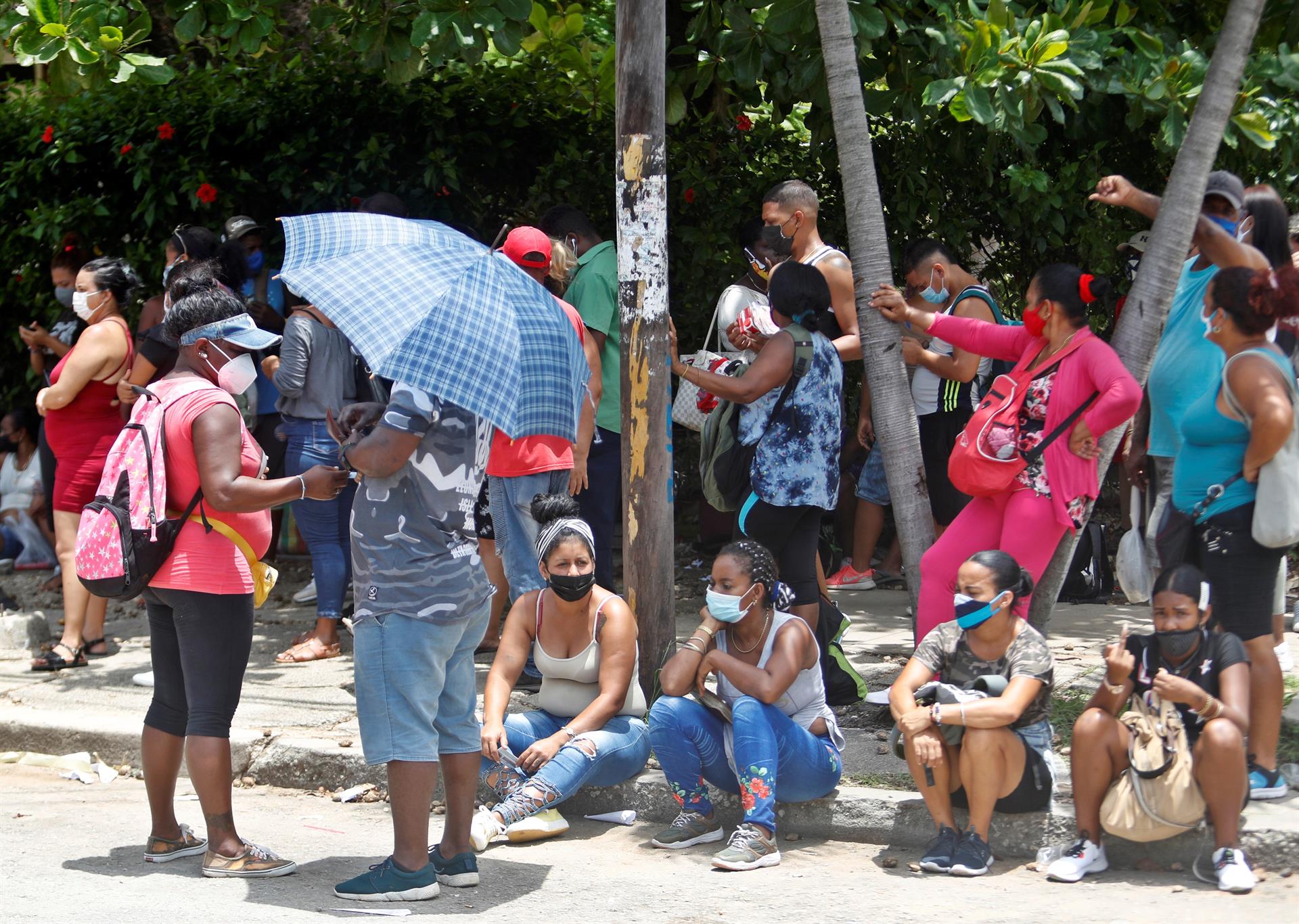 Cuba is going through a health crisis. (Photo: EFE)

This is the largest anti-government protest that has been registered on the island since the so-called “maleconazo”, when in August 1994, in the middle of the “special period” Hundreds of people took to the streets of Havana and did not leave until the then Cuban leader Fidel Castro arrived.

In the protests carried out this Sunday by hundreds of Cubans in the towns of San Antonio de los Baños (Artemisa, west) and Palma Soriano (Santiago de Cuba, east), acts of police violence have been registered, according to reports from eyewitnesses.

This morning hundreds of Cubans took to the streets of those towns to protest against the Government shouting “Down with the dictatorship!”, “Freedom”, “we have no fear” and “homeland and life.”

Residents of San Antonio, a town in the Artemisa province located about 37 kilometers west of Havana, told Efe reporters that during the street demonstration the police violently repressed and detained some of the participants.

Faced with the unusual public protest in San Antonio, the Cuban president appeared at the scene, Miguel Diaz-Canel, who in an act of response held in a square in that town with a group of supporters launched a proclamation in which He blamed the shortage of food and medicine on the United States embargo against the island.

In the Caribbean country’s social networks, videos from other places have circulated in the last hours, such as the eastern town of Palma Soriano, where hundreds of people have also mobilized in the streets and slogans such as “No more lies”, “unity” and “we want help”.

With information from EFE

Keep reading: Díaz-Canel applauds “resounding victory” vote at the United Nations against the embargo on Cuba