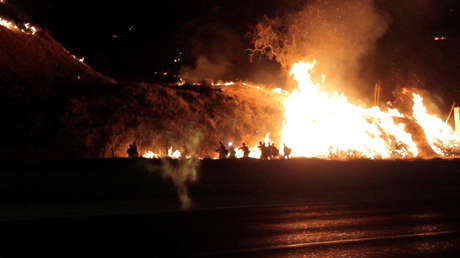 Firefighters are trying to contain a wildfire in Northern California amid high temperatures, which could exceed 37 degrees.

A wave of fires affects several points in California, Arizona, Oregon and Nevada, in the western United States, reports AP, as seen in a series of images shared on social networks.

Firefighters are trying to contain a wildfire in Northern California amid high temperatures – which could exceed 37 degrees – that has caused the temporary closure of a major highway.

What is so far the largest wildfire of the year in this state, has already left at least six houses burned in the town of Doyle, of about 600 inhabitants.

“It seems that the worst is over in the city, but on the mountainside the fire is still strong,” explained a local named Bob Prary. “I’m not sure what will happen if the wind changes direction,” he added. Gusts of up to 32 kilometers per hour are expected in the area.

In Arizona, a small plane crashed Saturday while studying a wildfire in rural Mohave County that had started because of lightning. The plane crash claimed the lives of the two people who were aboard the plane.

The National Weather Service in Medford, Oregon, said the fire in that state could experience “extreme growth.” In fact, strong winds have spread the flames to an area of ​​580 square kilometers.

Did you find it interesting? Leave your opinion in the comments!