. Demi Moore turns on the nets by posing in a bikini and in the natural.

The American actress Demi Moore captivated her Instagram followers by posting two photos in a bikini and in the natural. The Hollywood star is seen in front of the mirror in a black swimsuit that undoubtedly enhances her figure.

The 58-year-old Moore garnered hundreds of thousands of likes for these two photos she shared with her Instagram followers. The Roswell, New Mexico-born actress accumulates 2.4 million followers on that social network.

The “Indecent Proposal” and “Charlie’s Angels” actress, among other blockbusters, often comes off naturally when she chooses to pose scantily-clad for social media.

In these two images, Moore exhibits his body without any editing. “Getting ready for another day in Paradise,” wrote the actress to illustrate the two images that revolutionized her Instagram.

The actress obtained the recognition of her followers, who celebrated that she sets the example by showing that she accepts her body regardless of age or physical condition. They see her as the depository of a message for the new generations of women and also as a role model for the advertising campaigns that tend to stigmatize through the consolidation of stereotypical beauties.

Days ago, Demi Moore posted a series of photos with her daughters wearing different models of Andie Swim swimsuits, a brand for which she has been making juicy money investments since 2017.

Demi posed next to Rumer, Scout and Tallulah, the three daughters she had with actor Bruce Willis. It should be noted that the actor couple is divorced, although they have a great relationship. Without going any further, a good part of the mandatory isolation of 2020 was spent together.

“The women of the Moore-Willis clan are coming to raise the temperature of your summer,” wrote Rumer Willis Moore on Instagram.

Demi Moore highlighted the importance of working alongside her daughters: “It was important to me to include my daughters in this campaign. I hope that other people seize the opportunities in their paths to create meaningful connections and celebrate every moment with the people they love. “

Demi Moore started the year by walking for the Fendi brand. After the parade, criticism of the actress circulated on social networks for alleged abuse of cosmetic surgeries. They questioned her for her alleged ideological contradictions. She, who promotes the natural female bodies so much, supposedly showing herself retouched by visits to the operating room.

While the actress received the news of the marriage of her daughter Tallulah Willis, who will soon go through the altar to seal her engagement with the film director Dillon Buss.

In May 2021, Tallulah Willis reported in a report that “I punished myself for not looking like my mother”, recalling the body dysmorphia that for years kept her in a constant depressive process.

“I punished myself for not looking like my mother, after they told me that I was identical to my father since I was born,” said the youngest of the marriage between Bruce and Demi.

“Congratulations to my little girl and her adorable lover on the engagement! Happy day to the whole family, ”Demi wrote to celebrate the upcoming marriage. 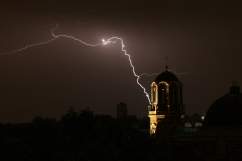