. Who were the judges of Nuestra Belleza Latina VIP: Tenth Season?

The tenth season of Nuestra Belleza Latina has been one of the most special programs since the Univisión reality show premiered, with the participation this time of former candidates from whom the winner was chosen.

And the 2016 program, called NBL VIP, where initially 26 semifinalists were selected, due to the high level and preparation of the candidates, was a major challenge for the panel of judges, which in the tenth season of Nuestra Belleza Latina turned out to be luxurious.

Once again and for the tenth year in a row, the Univision pageant featured the world’s most famous and recognized queen expert, Osmel Sousa, as the chairman of the panel of judges.

VIP judges in NBL, Jacky brings a beauty in her belly! Daniel Arenas, Osmel Sousa and Jacky Bracamontes are the jury of the 10th edition of Nuestra Belleza Latina. The votes of the actress and host are worth double due to her pregnancy. Presented by: Chiquinquira Delgado, Javier Poza Judges: Osmel Sousa, Jacqueline Bracamontes, Jomari Goyso and Daniel Arenas. SUBSCRIBE bit.ly/1LKHIs9 Follow us on Facebook: facebook.com/NuestraBellezaLatina Follow us on… 2016-02-29T18: 12: 21Z

As happened on previous occasions, but this time, with greater demand and even having to intervene in direct conflicts between the contestants and behaviors that he did not want to see in his queens, Osmel was characterized by being more scathing than ever, but at the same time he showed his dose of paternalism in more than a moment.

A very striking detail of Osmel Sousa during his time at NBL VIP, was his new look, because the viewers and the girls saw him premiering a very platinum hair, which was wonderful.

The real touch in the jury ran in the tenth season on behalf of the former Miss Mexico, and beloved actress, Jackie Bracamontes, who once again occupied the chair left two previous editions by former Miss Universe Lupita Jones.

The former Mexican queen was not only a dose of tenderness at the time of guiding the contestants, but she also pointed out in a wise way those weaknesses of the girls, whom she knew how to help with a lot of maternalism, part that she had on the surface, because she he was pregnant with his daughter Renata.

And finally, the position of the gallants, which in the previous year had been occupied by the fashionista Jomary Goyso and in past editions had figures such as Julián Gil and Jorge Aravena, in the tenth season of the Univisión reality show was carried out by the Colombian Daniel Arenas.

Arenas, renowned telenovela protagonists, enchanted the audience for the chivalry and respect with which he treated the contestants when expressing their criticism, and that touch of flirtation and tenderness when mentioning their successes.

The tenth season of Nuestra Belleza Latina, had as winner the Dominican Clarissa Molina, who a year ago had been finalists in the same show and had represented her country in Miss Universe.

Clarissa won with 53% of the total votes, while the Mexican Setareh Khatibi, was named first finalist, with 30% of the votes. Bárbara Turbay and the Puerto Rican Catherine Castro were the other two finalists who arrived at the coronation gala. 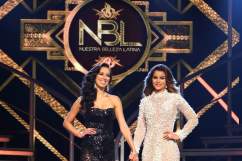 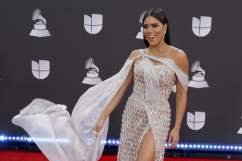