A little over a month ago I received a Wiko Power U30 to test it. I admit that I did not know much about this smartphone before that, so the first thing I did, of course, was go to the website of its manufacturer to review the specifications. And, if I’m honest, I was a bit surprised. And, while waiting to be able to test it, it seemed quite promising, because despite being an entry range for some elements such as its SoC, other aspects of it pointed to higher leagues. And I mean, mainly its battery and the size of its screen.

Wiko has been characterized, for many years, by designing simple, entry-level phones with very affordable prices, and for keeping “classic” phones in its catalog, that is, not smartphones. Now, when seeing the Wiko Power U30, it can be said without any doubt that the French manufacturer has its new top of the range, and that although it is still located in the entry range, this smartphone can be a sign that it has gotten on the elevator to go up to the mid-range.

Be that as it may, beyond the possible future plans of the company, the truth and doubt is that with the Wiko Power U30 they have taken a very interesting leap, and that they have designed a smartphone that, in its value for money, is an incredibly competitive option in its segment. An option that surprised me when I knew its specifications, and that has left me with a very good taste in my mouth after having tried it.

You see, yes, at first I indicated that I received it a little over a month ago … does it take so long to test a phone? Well the answer is no, but yes. Obviously, very complete product analyzes can be carried out in a few days, and in fact we usually carry out these types of tests in this way ourselves. However, there is a particularly relevant aspect of this Wiko Power U30 that, to be tested in depth. I’m talking, of course, about their autonomy. And although I will go into detail later, I will tell you that at this point the U30 passes with a note.

As a general rule, we use the SoC of smartphones as a guide to the range in which the device is located. In the case of the Wiko Power U30 we find a MediaTek Helio G35, an encapsulation for the entry range manufactured in 12 nanometers and inside which we find eight Cortex A53 cores, capable of yielding up to 2.3 turntables. Next to it we find a IMG PowerVR GE8320 GPU clocked at 680 megahertz. The SoC also has Mediatek HyperEngine Gaming Technology, which improves its efficiency in games.

Accompanying the SoC we find 4 gigs of RAM and 64 gigs of storage that can be expanded with a MicroSD memory card of up to 256 gigs. And as regards its connectivity, it allows the simultaneous use of two SIM cards and is compatible with 4G and 3G networks. Without leaving the wireless section it also offers connectivity WiFi b / g / n (2.4 GHz) and Bluetooth 4.2 and GPS / Galileo / Glonass / Beidou positioning. It has a USB-C port load and data, and a minijack connector for headphones.

This is part of what we will find inside, but it is not, of course, what most attracts the attention of the Power Wiko U30. The first thing that stands out when taking it out of its box and packaging is, of course, its screen and the size of the phone, which is determined by it and we understand that also in part by the battery. And it is that we find a IPS panel of no less than 6.82 inches with a 720 x 1,640 resolution dots and a density of 270 dots per inch. 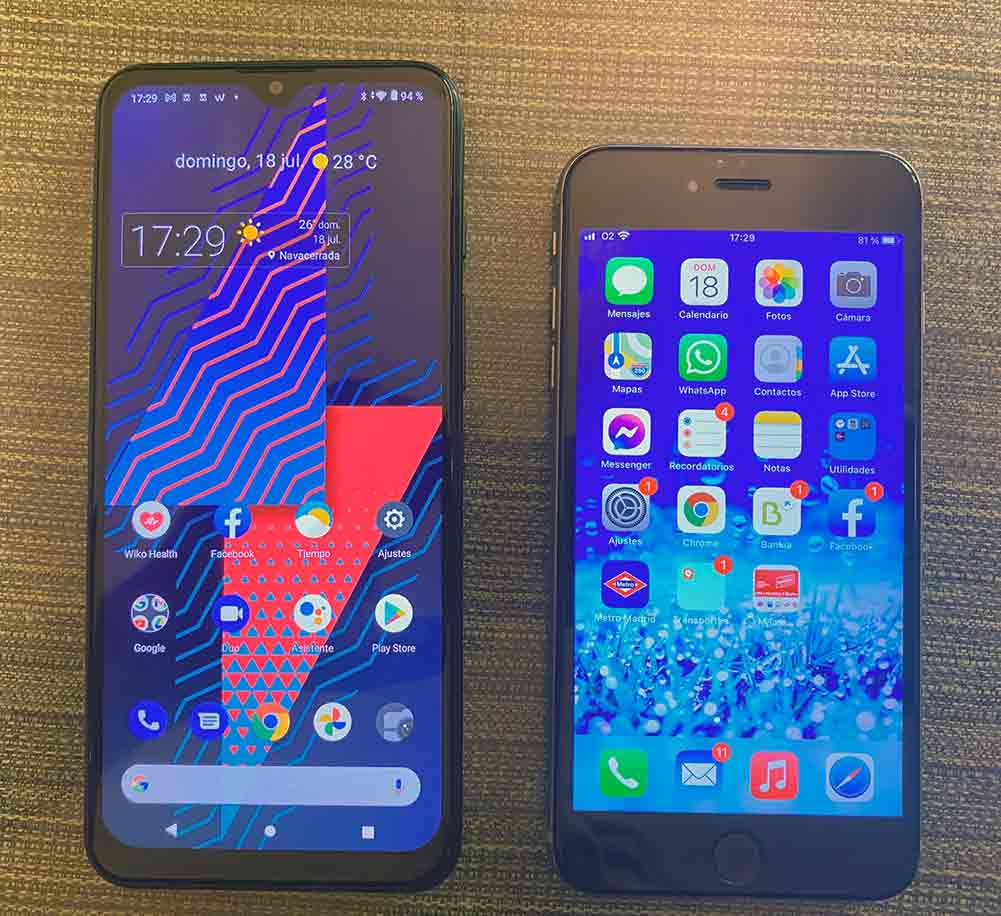 In this photo you can compare the screen size compared to that of my old iPhone 6S Plus. The difference is abysmal.

And yes, I have named another of its key points, the battery, undoubtedly the most remarkable point of the Wiko Power U30, and that is that we find nothing less than 6,000 milliamps which, according to the manufacturer, offer autonomies of up to 891 hours in standby mode and 37.8 hours of talk time on 3G connections. In order not to eternalize your recharge, it has a 15-watt fast charge function. It’s certainly not the fastest system we’ve seen, but it does offer decent loading times.

Regarding its cameras, in the main one we find three elements: a 13 megapixel main sensor which is accompanied by a secondary 2 megapixel focused on background blur (bokeh) and a third lens that, according to the manufacturer, allows the Wiko Power U30 to better control ambient light and detect scenes for post-processing of images . For the front camera, which we will find in a small notch in the upper central part of the screen, the Wiko Power U30 equips an eight megapixel sensor.

Personal experience: a month with the Wiki Power U30

This is, in specifications, the Wiko Power U30, a smartphone of the entry range with a battery and a screen size that point much higher. And with this curious mixture present, and taking into account that in terms of performance it was going to take a big leap down (my personal phone is a high-end), I set out to test this smartphone.

Its implementation is very simple, it has the traditional Android configuration assistant that, in this case, is complemented with the Wiko customization layer settings, which adds the most diverse functions: from the unlocking of the mobile by means of facial identification to the configuration of keyboard shortcuts for common tasks, such as screen capture. We also met for the first time with Wiko App Starter, an app recommender that I understand that many users find it practical, but that I find it a bit cumbersome.

With the Wiko Power U30 battery fully charged, one of the first things I did was download and install AnTuTu (yes, despite the thousand security warnings) to have a first metric of its performance. And, as expected, the test result can be somewhat disappointing if you forget that we are talking about an entry range.

97,392 points. For a bit of context, the Nubia Red Magic 6, which occupies the highest position in the ranking of devices tested with AnTutu, obtained a total score of 842,168. I insist that we are talking about an entry range because at first, seeing its autonomy and the size of its screen, one can get the wrong impression. The Wiko Power U30 does not play in that league, and if you are aware of it and use it for what it is, the result is most satisfactory.

Let’s talk, first of all, about autonomy. I am one of those people who when seeing the charge indicator below 50% start to get nervous, so I have enjoyed a lot to see the days go by without this happening. But before that, to clarify that I have done two autonomy tests of the Wiko Power U30, a first as the main phone, and the second as a complementary device without a SIM card, connected via WiFi.

In the first case, in which the manufacturer claims that a recharge of the Wiko Power U30 offers autonomy for four days, in my case I must say that there were almost five, and twice. It is true that I do not use the phone intensively, but even so during those days I used it to communicate, to inform myself, to read, even to play, and the feeling of having spent the four days without having worried about cables, chargers, etc. , it was really satisfying.

So much so that, when in doubt as to whether he had done something wrong, I decided to repeat this same test a second timeAfter completing the first, and the result was similar, more than four days of autonomy. Just for this, just for the possibility of being able to make a weekend getaway without having to worry about the charger, or unexpectedly spending a couple of nights away from home without being cut off, the Wiko Power U30 already seems like one more choice. how remarkable. 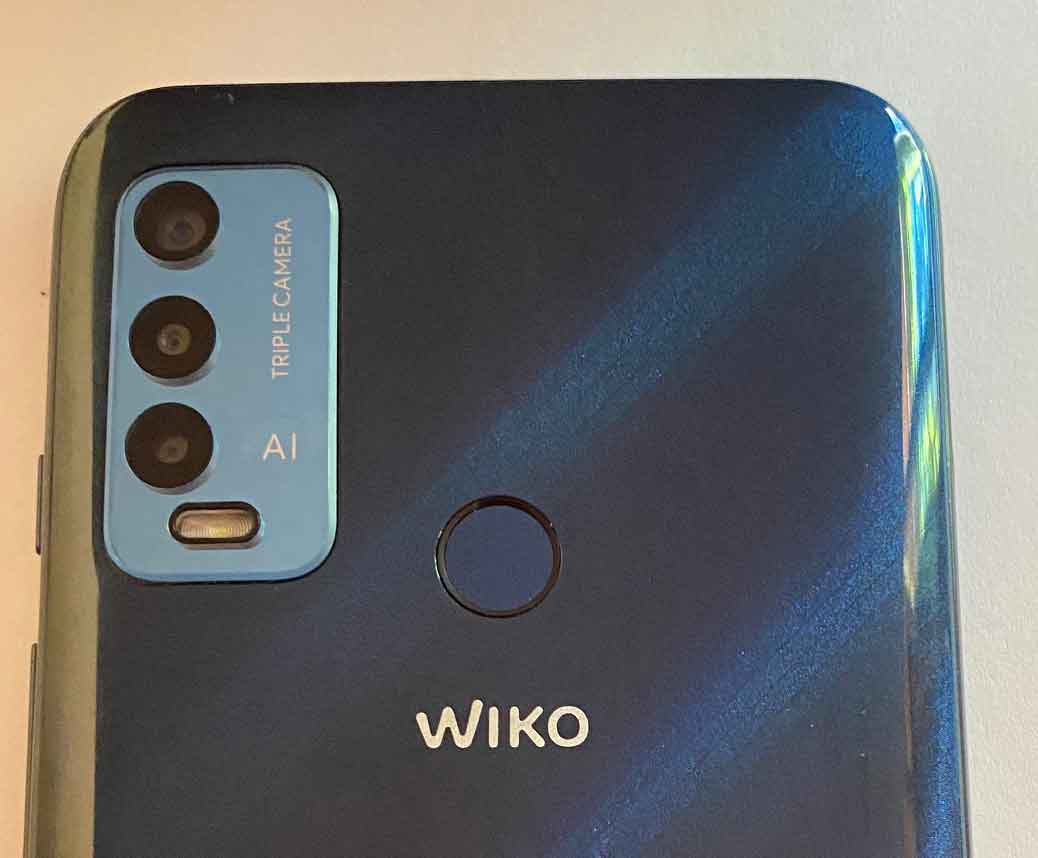 On the back we can see the main camera and, next to it, the biometric sensor that allows you to unlock the Wiko Power U30 with your fingerprint.

And then there is the other test, that of using it as a secondary device, connected to WiFi but without a phone. In this case, as you can imagine, I also used it to play games, to access social networks, to watch some video and some stream fragment, etc., and in this case a full charge gave me an autonomy that exceeded a week. For this type of use I usually use a tablet, which as a general rule I have to charge every four or five days.

Regarding its performance, as I already mentioned at the beginning, the Wiko Power U30 is based on a MediaTek Helio G35 SoC, which is what it is and goes as far as it goes. The four gigs of RAM are up to the task and generally pFor most of the uses I have made of it, I have not been left with the feeling of needing more. It is true that I tend to demand reliability rather than performance, and that when I asked the phone for more of the latter, especially in some games, it began to show limitations. But it would be unfair not to point out that this happened only when I set out to force the machine.

Your screen generates mixed feelings in me. I’ve been remembering for a long time and I don’t remember personally having tried a smartphone with a larger screen than this Wiko Power U30. At 6.82 inches, it grabs attention right out of the box, and it certainly makes you expect to enjoy the visual content a lot. However, its resolution and density make the experience a little half-baked. To work with apps like Excel, to read or even to work on the WordPress desktop, it is a real marvel.

Thus, I would almost say that the Wiko Power U30 is a bit in a no-man’s-land, since in some respects it is an entry-level smartphone, while for others it could be comfortably placed in the mid-range. It’s more, A 6,000 milliamp battery is not even seen in most of the top of the range from other manufacturers. So much so that, at times, I have doubted whether to qualify it as an entry range or mid-range. In the end it has won the classification based on its SoC, but with a somewhat more powerful integrated, which also provides some improvements, and a screen with a little more resolution, we would have a more than remarkable smartphone, and far from the range of entry.

Despite regularly using a high-end phone, this Wiko Power U30 has left me a very good taste in my mouth for its autonomy, for very decent performance within its segment and, also, because it points out the ways of a possible mid-range or even high-end from the manufacturer. Complicated, but not impossible.

The Wiko Power U30 smartphone Already on sale and the price recommended by its manufacturer is 169.99 euros.