. Greidys Gil cries over what is happening in Cuba: He asks for the intervention of the United States.

Cuba is experiencing moments of tension, amidst the protests and demonstrations of thousands of Cubans who have decided to take to the streets to demand the overthrow of the communist regime of the Castro era, which has plunged the island into poverty and constant violation. of human rights and basic freedoms for more than six decades.

And to the voices of support for the protesters and the demand that the deaths of those protesting and the political arrests cease, was added the former Nuestra Belleza Latina Greidys Gil, born in Cuba.

Through a meaningful video, in which he is seen literally crying in pain, not only because of the abuses to which the protesters in Cuba are being subjected by the island’s authorities, but also because of the years of abuses he has suffered. Due to face the country under the dictatorial regime of the Castros, Greidys Gil raised his voice on social networks.

“CUBA NEEDS SUPPORT !!! 🇨🇺 At last I take out everything I have inside !!! # soscuba. The people of Cuba are still in the streets in the fight, unarmed and are being massacred by the government: children, young people, old people, women, men ALL 💔 ”, was the message with which the winner of Nuestra Belleza Latina shared her emotional cry .

Videos show the repression of protests in Cuba | Noticias Telemundo Official video of Noticias Telemundo. In his second intervention on the national network after the massive protests this Sunday in Cuba, the president, Miguel Díaz-Canel, acknowledged that the country is experiencing a deep economic crisis and ensures that there was no repression of the demonstrations. Download our App: telemundo.app.link/8005Db9UP6 SUBSCRIBE: bit.ly/TLMDNoticiasYT Noticias Mediodia Noticias Telemundo Mediodia es… 2021-07-12T18: 21: 18Z

The former beauty queen, who arrived in Cuba in early 2000, went further and even called on the United States Government to carry out an intervention on the island.

“We cry out for the US to intervene and for the world to do something about this genicide !!! Respond and do not abandon our defenseless people again !!!!! 🇨🇺🕊🙏🏻 #cubalibre #abajoladictadura ”, added the television reporter.

The video of the former beauty queen went so deep, that in just a few hours it exceeded 250,000 views, and there she opened her heart fully.

“I have a pain in my chest that is so great that my voice doesn’t even come out. I have to speak, I have to use my voice to speak for a people that is being massacred in Cuba by the Government. We have to end the tyranny that we have had in Cuba for 62 years ”, commented the former Nuestra Belleza Latina. “And I tell you, I lived in Cuba for 25 years, many know my history, through Nuestra Belleza Latina, but many do not understand the history of my Cuba.”

Greidys insisted on asking everyone for help and that those who can raise their voices supporting the overthrow of the dictatorship in Cuba do so and do not remain silent.

“Many like me have left our land out of necessity. We have emigrated looking for a better future, for our families, because it was our turn, and there are many who did not have that opportunity, “said Greidys. “The president of Cuba, who is crap, that nobody put him in, nobody elected him, he has put the people to kill each other. The same people who are starving kill others who are starving… it would be easier to stay in my comfort, in my freedom, in all the things this country has given us and keep quiet, but I am not going to do it. ” 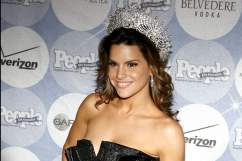