. The must-see photos of Greidys Gil.

Greidys Gil is remembered as one of the most talented and charismatic queens in the history of Nuestra Belleza Latina, Univision’s television competition that has served as a springboard for many Hispanic women to advance their artistic careers in the United States.

Gil managed to win the crown in the third season of Nuestra Belleza Latina that was broadcast by Univision in 2009. After his triumph, the star enjoyed an exclusive contract with Univision that allowed him to be part of major television productions such as “Sábado Giant”.

The 40-year-old interpreter is the only woman of Cuban origin who has been crowned Nuestra Belleza Latina throughout the eleven seasons that the show airs through the Univision screens.

Here are the photos you have to see of Greidys Gil:

Using her unattached personality, Greidys Gil is one of the few queens of Nuestra Belleza Latina who has shown herself without a drop of makeup through social media.

Far from refusing to show his natural appearance through digital platforms, Gil published a photo in April showing his freckles with great pride.

Greidys Gil has been happily married to the American businessman Luis Zaldivar since 2015.

The couple celebrated a dream wedding in the Dominican Republic with the presence of their closest family and friends, including personalities such as Raúl de Molina and Aleyda Ortiz.

On the happiest day of his life, Gil opted for a tight-fitting dress that stole the attention of all the guests.

Greidys Gil is the mother of two children, the result of her marriage to Luis Zaldivar. Through his social networks, Gil shares photographs of the most momentous moments that he lives in the company of his young children.

“Being a mother to this pair has been my greatest and most valuable blessing. Thank you God for this privilege. I love you to infinity children and I will celebrate with you every day of my life, “said the star in a recent publication on the Instagram platform.

Passionate about healthy eating and sports, Greidys Gil has an enviable figure at 40 years of age.

Nuestra Belleza Latina 2009 often shares photos in a bikini on the paradisiacal beaches of Miami and has earned the praise of her thousands of followers who have let her know that they admire how good she looks after becoming a mother.

Grateful to Univision for an opportunity that changed her life

Twelve years have passed since Greidys Gil auditioned for Nuestra Belleza Latina. Despite the time that has passed, Gil remains constantly grateful to Univision and the production of the competition for being participants in the beginning of her artistic career in the United States.

“It’s been 11 years and I still have the pass that Osmel Sousa gave me when I auditioned for Nuestra Belleza Latina. An opportunity that changed my life, “said the famous Cuban on the Instagram platform in 2020. 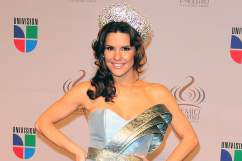