The Internet has become essential in our lives so that one of the things we value most is having a good connection and although we sometimes complain, it seems that Spain can boast of being one of the countries with the best internet connection a new study has been revealed.

Which countries have the best internet connection?

Internet access is highly valued throughout the world, despite the fact that there are disparities between different countries as revealed by the site comparethemarket.com through a study, which has been Posted by Business Insider, and in which you have analyzed 35 of the 37 members of the Organization for Economic Cooperation and Development (OECD), to know where it is possible find the best internet connection, taking into account the price of the service in each of the countries analyzed.

And among all, it is Switzerland tops the ranking. The Swiss Confederation offers an average speed of 186.40 Mbps, what allows you download an hour of streaming video in 2 minutes and 9 seconds.

The only downside for Switzerland is the average subscription price to the Internet, which is 56.93 euros. This is also the country with the highest average price among the countries studied. In second place in the ranking, we find Denmark, what offers an average download speed of 179.81 Mbps, allowing you to download an hour of streaming video in 2 min and 13 sec, while the Average subscription price is 34.84 euros. 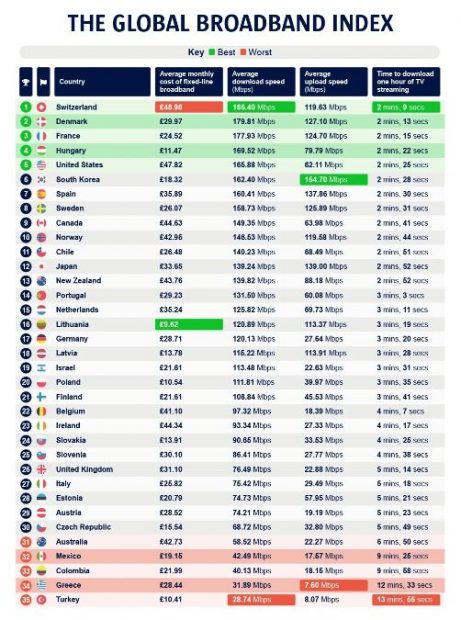 After Switzerland and Denmark, the countries with the best internet connection are France, Hungary, the United States and South Korea, while Spain is in seventh position with an average observed speed of 160.41 Mbps, which allows us download one hour of video in 2 min and 30 sec. And as for what is paid in our country of average Internet subscription, it is billed to 41.92 euros.

Among the countries that are placed in the lower part of the ranking we find Lithuania, ranked 16th, which however is the country that offers the cheapest subscription with only 11.18 euros per month. And the countries with the lowest ranking are Australia, Mexico, Colombia, Greece and Turkey, with an average observed speed of 28.74 Mbps, while an hour of video transmission takes an average of 13 minutes and 55 seconds to download in Turkey, which is the country at the end of the table.