. Who were the jurors for the ninth season of Nuestra Belleza Latina in 2015?

Francisca Lachapel won the crown of the reality show Nuestra Belleza Latina in the ninth season of the Univisión program, which ran from January 18, 2015 to April 12.

But together with the beautiful Dominican, considered one of the most beloved and pampered queens that Nuestra Belleza Latina has given, once again it was the judges who stole the show.

And on that occasion, the panel of judges of the Univisión contest was once again chaired by the famous Osmel Sousa, considered a figure and an emblem in Nuestra Belleza Latina, who with his comments and his particular style of saying things, generated Hates and loves between the contestants and the viewers.

Jomari pulled out his claws to defend Jacky Bracamontes The judges of Nuestra Belleza Latina may not agree on many things, but Jacky is the new one and has someone to defend her. Nuestra Belleza Latina: the search for the most beautiful Latina in the United States. Presented by: Chiquinquira Delgado, Javier Poza Judges: Osmel Sousa, Jacqueline Bracamontes and Jomari Goyso SUBSCRIBE !: bit.ly/NBLSubscribe Follow us on… 2015-02-02T05: 45: 38Z

And as a replacement for the chair of former Miss Universe Lupita Jones, who this time did not participate in the judging table of Nuestra Belleza Latina, in the ninth season of the reality show they invited another former Mexican queen: Jacky Bracamontes.

The former Miss Mexico, who in addition to being an actress works as a television host, added a touch of tenderness and good vibes to the judges’ table of the ninth season, and was one of the favorites of the participants.

Behind the scenes Osmel has already made claims to Jackie Bracamontes! Has the problems between the judges of Nuestra Belleza Latina already started? Listen to the claim Osmel made to Jackie. Wake up America with the latest news and the best of entertainment: gossip, games, contests, helpful tips, and special guests. Presented by: Karla Martinez, Satcha Pretto, Alan Tacher, Johnny Lozada, Ana Patricia, WilliamVáldez and Paul Stanley. For… 2015-01-22T13: 33: 28Z

And unlike previous versions of the show, in 2015 the third judge was not a soap opera heartthrob, as used to be the case, since actors such as Julián Gil, Jorge Aravena and Jencarlos Canela occupied, but this time the chosen one was fashionista Jomary Goyso.

The fashion guide of and star of the small screen in matters of image and style, gave a unique touch to the version of Nuestra Belleza Latina, not only with his advice and comments on the looks of the young women, but also He took the place of Lupita Jones, in the notorious fights with Osmel Sousa.

Throughout the reality show, in that year, Jomary and Osmel were involved in moments of discord, where each one brought out their credentials, and Jackie Bracamontes had to act as an intermediary to stop the clashes, which were fun.

Although the final decision of the winner of the show was taken, as is usually the case from the beginning of the contest, by the vote of the public, who on this occasion supported Francisca Lachapel with almost 50 percent of the votes, leaving Nathalia casco in second, the jury shared the decision.

Javier Poza and Chiquinquirá Delgado were the presenters of the ninth season of Nuestra Belleza Latina.

Francisca Lachapel was crowned as the ninth queen of Nuestra Belleza Latina The Dominican captivated the public with her talent and charisma during the competition, and because of her sympathy she managed to take the crown to her country. SALT AND PEPPER [Show Description] (the same for all videos) A show dedicated to gossip, show business, entertainment and everything related to entertainment. Presented by:… 2015-04-13T05: 09: 05Z

Catherine Castro, another big favorite, was named third in the competition, while Dominican Clarissa Molina, who eventually won the crown at the Nuestra Belleza VIP pageant, took fourth place. The Mexican Mariana Torres was fifth and the Dominican Geisha Montes De Oca, was sixth. 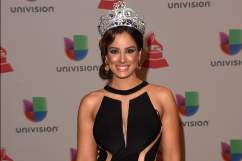 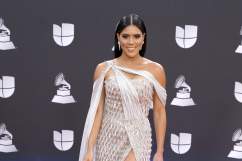