Last week the first film of Phase 4 of the Marvel Cinematic Universe, Black Widow, was released – 87%, a film in which Scarlett Johansson not only showed her enthusiasm as the lead, but also as a producer by having an important place in the development of the script and the choice of director Cate Shortland. While the film managed to garner attention at its launch, everything has indicated that it is suffering a significant drop in revenue.

The large showroom chains have claimed that this drop is the responsibility of the Disney Plus platform, because the film is being projected simultaneously. On the other hand, there is the debut of Space Jam: A New Era – 64% with LeBron James as the protagonist, a film that has generated a lot of controversy for eliminating some memorable characters and including others more controversial.

The sequel to Space Jam: The Game of the Century – 36% has exceeded their own expectations in terms of revenue, as The Hollywood Reporter reported that the production expected to debut in the United States with USD $ 20 million and PostTrak reported that in its opening weekend generated USD $ 31 million in the North American country. Now, thanks to Canacine’s weekly report, it has been shown that the impact on the Mexican box office was quite similar.

The analysis spanning July 15-18 shows that Space jam 2 It debuted in Mexico with $ 62.4 million and 925.3 thousand attendees to the showrooms, which places it in the first place at the box office. Black widowFor its part, it has dropped only one position, however, the decrease in revenue in a week has been quite striking because this weekend it raised $ 31.8 million when last week it had debuted with $ 93.3 million. In the last three days, the Marvel Studios film received 440.6 thousand attendees with a cumulative of 2.1 million.

The arrival of El mesero, a Mexican comedy starring Vadhir Derbez, has also attracted attention, which debuts in third place at the box office, grossing $ 20.7 million and receiving 300.9 thousand attendees. Fast and Furious 9 – 65%, which remained in the first places in previous weeks, has reached its fourth week of exhibition, grossing $ 19.4 million and a total of $ 481.5 million; in addition, it had 316.1 thousand new attendees and 7.3 million in total.

It may interest you: Study reveals whether Black Widow had greater or equal impact on female audiences

The Forever Purge – 65% have reached their third week on the billboard with $ 9.8 million this weekend and a cumulative total of $ 76.8 million, with 159.8 new attendees and 1.2 overall. It is also important to observe the path that two films have taken that managed to debut in the first places and stayed in the top 4 for several weeks. The first one is Cruella –

93%, which is also showing on Disney Plus and has just been released from Premier Access to be part of the common catalog.

The film starring Emma Stone celebrates its eighth week in theaters with a total of $ 231.8 million raised and 3.4 million attendees throughout its career in Mexican cinemas. Conjuring 3: The Devil Made Me Do It – 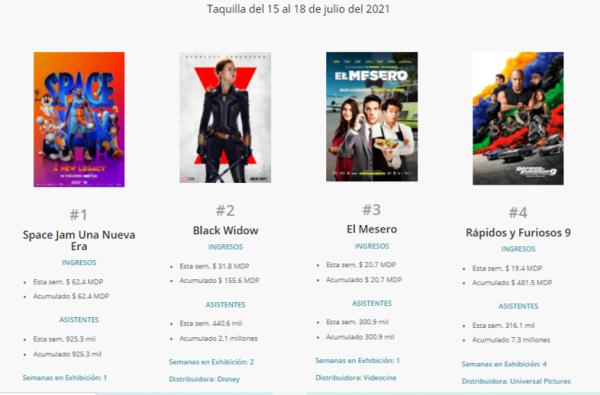 We recommend: REVIEW | Black Widow: The Movie Captain Marvel Should Be