A ‘historical sorpasso’ has occurred this year 2019 within the Spanish consumption model. For the first time in history, sales made through online channels have exceeded those made physically through shopping centers. So establishes it Bank of America, the second largest bank in the United States after JP Morgan, in a report on shopping centers in Spain published this Thursday.

BofA has calculated how much Spaniards will spend this year on online purchases and the figure is dizzying: 49,000 million euros, which represents 3,000 million more than the 46,000 million sales through shopping centers with which 2019 will end. The bank has calculated this figure based on data from both the National Markets and Competition Commission (CNMC) and the Spanish Association of Shopping Centers (AECC).

In this graph you can see the push that online sales have hit in the last three years, in which it has practically increased by 25,000 million to double its size. 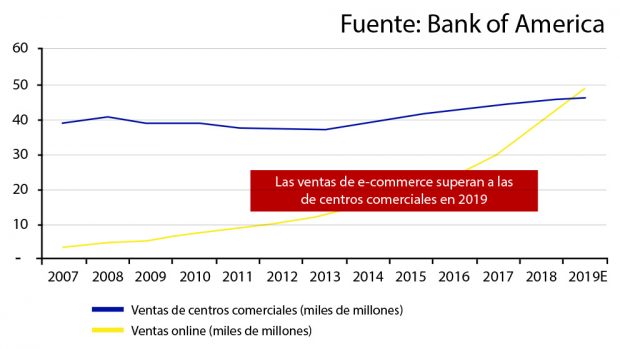 This report from the Bank of America research team deals with the evolution of shopping centers as a real estate asset, with special attention to some of the major players in the sector such as Colonial or Merlin Properties. However, BofA analysts make it clear that “if retail sales have been driven primarily by consumer confidence in the past, growing online penetration now plays an increasingly important role. We expect a lack of rental growth and a decline in the value of real estate assets. Similarly, pressure online and on stores to compete on price will drive rents down. ‘

They will have more strength, they say, the shopping centers that have a good portfolio of food offer and that are located in central areas.

The physical channel does not die

Another of the conclusions that can be obtained from this trend established by banking analysts is that, for the moment, purchases through shopping centers, that is, the physical channel of a lifetime, they have not been resentful by the push of the internet channel. Quite the contrary, since 2013 they have experienced a slight increase, which has brought them to 46,000 million today compared to 38,000 approximately six years ago.

Thus, the increase in the online channel occurs above all in social and generational layers that are not so used to going to shopping centers. For the moment, the market has almost doubled in recent years, but online growth has not led to a corresponding decline in the physical channel.

As the analysis indicates, “the penetration of online sales will automatically increase with the increased internet use, as the younger generations grow up and represent a greater proportion of the total population. ‘ In addition, the document highlights: “The United Kingdom has Europe’s highest online retail penetration rate with 19% and is more affected by cannibalization towards physical centers. However, the rest of Europe has a lot of room to increase online rates, particularly those countries with greater Internet access, such as Spain, but also Germany and the Netherlands ”.