Valtteri Bottas is willing to earn renewal for Mercedes Whatever. A few weeks ago, Lewis hamilton He has already defended his teammate, very pressured, especially by the English media, who wants to see a pilot as talented as George Russell next to Hamilton driving a Mercedes next season after his spectacular performance this year in a Williams. Bottas knows that his situation is very complicated, and therefore, he is trying to do his best for the team to help Lewis as a squire in his fight for the title, and in turn helping Mercedes with his points to fight Red Bull in the Constructors’ championship. And on Sunday, he earned some good words from Lewis and his crew chief, Toto wolff, for his race pace, third position and for having helped Lewis by letting him pass. But not only that, Valtteri even became an expert for a few seconds in the middle of the race, just after the British accident with Verstappen.

“Now, Valtteri, you can go alongside Lewis. Do not anticipate it. Take a look to see if you see any damage on your car. You only see by his side ”, they told the Nordic man on the radio. “The left side or …? “the Nastola pilot replied. “I think it should be the left, yes”, they answered him. And there it was. Valtteri was positioned parallel to Hamilton, to his left, and in the television images you can see how he turns his gaze towards Lewis’s car. “Honestly, I don’t see much. Maybe some small pieces on the front wing but … “Bottas commented in a key information for the group, thanking him for his work on the radio.

Hamilton and Wolff surrender to Bottas

Later, after Hamilton’s victory, the Englishman himself and the team leader, Toto Wolff, surrendered to the work done by Valtteri thinking about the team and helping his teammate.

“Coming out (after the pit stop), honestly, Charles was not on my mind. I was really trying to see if I could catch up to the car ahead (Norris), just go one by one, and obviously I made it to the McLaren. I was chasing Valtteri and today he was very kind to work as well as a teammate to allow me to pass, so that I could chase the team victory. That’s great sportsmanship I really appreciate it. I couldn’t have done it without Valtteri’s teamwork and the incredible team effort. “said Hamilton.

“He had a brilliant weekend in my opinion because he could have been on pole if he had a slipstream on Friday night, and that was obviously compromising his performance. If you are on pole, it is much easier. And he was very fast, he had a really solid race and only Lewis, coming from behind, was in another dimension for everyone else on the track, ”commented Wolff.

“But Valtteri was the second fastest car and helped Lewis secure his path, and Valtteri is just a great team member and a great driver with the right character and personality.”Wolff added.

“It is very important because statistically his chances of winning the championship are very small compared to Lewis, who is very involved in the fight.. And we have discussed it, and no matter how difficult it is for a driver, there is no margin in this year’s championship ”, added the Austrian, still without having announced if next year he will have Bottas next to Hamilton again, or if he finally decides to promote a much more aggressive and talented driver like George Russell. Bottas brings ease to Lewis. George, on the other hand, is the future of Mercedes and they cannot take the risk that he wants to leave. Russell, despite everything, has already said that he would be “faithful” to Mercedes whatever they decide and that in 2022, whatever the team, he will drive with a Mercedes engine behind. However, he said he felt prepared to fight for a title if he was promoted. And it is precisely, George could argue the leadership to Lewis, something that the 7 times champion should see with worse eyes than the continuity of the Finn. 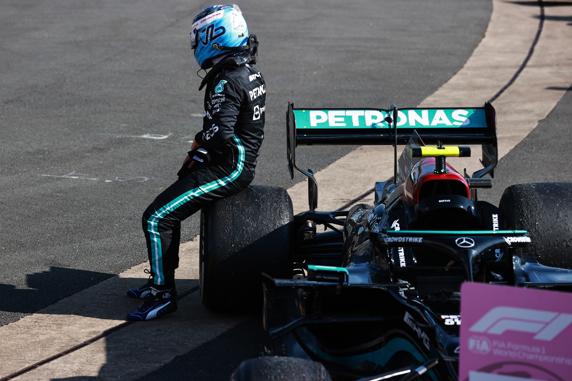