Francisca Lachapel is known in the entertainment industry for having been the winner of the reality show Nuestra Belleza Latina in 2015. Currently, the Dominican star is one of the main hosts of the morning show “Despierta América” on Univision.

Born Francisca Antonia Méndez Montero, the 32-year-old interpreter chose to use the last name of her first husband, Rocky Lachapel, during her participation in the ninth season of Nuestra Belleza Latina. Since then, the Spanish-speaking public has known her as Francisca Lachapel.

In an interview for the podcast ‘En Defensa Propia’ by Erika de la Vega in 2019, Lachapel expressed the reason why she continued to use her married name after her divorce with Rocky Lachapel: “I already started my career like this, no I see sense to change it. It’s just that it seems to me that it has as much cache… From Francisca Lachapel to Méndez, the better Lachapel ”. 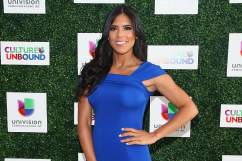 This is what you need to know:

In mid-May, Francisca stopped using the last name Lachapel in her official profiles on social networks. At that time, the television presenter preferred not to delve into details about her decision.

The Univision star has been married to Italian businessman Francesco Zampogna since 2019. Despite having an established marriage to Zampogna, she has not used her current husband’s last name.

In early 2021, Francisca confessed that she would eventually stop using the last name Lachapel out of respect for her husband Francesco Zampogna.

“Eventually I think I have to remove the Lachapel. It may also be out of respect, I say, to my husband. I think the fairest thing would be, especially now that we are going to have a baby, to change my last name, “said the beauty queen in an interview with Jomari Goyso for the ‘Sin Rodeo’ podcast.

When asked about the surnames she would like to use after ending her cycle as Francisca Lachapel, the television host mentioned that there was the possibility of reverting to her birth surname in honor of her childhood: “I would really like to. I say, like giving me the Méndez because there have been so many things that Francisca Méndez dreamed of, that she achieved and that she lives at this moment, that I feel it would be a gift for that girl who dreamed in Azua of living what she lives, of being television, with having everything you have ”.

Francisca was the first Dominican to be crowned Nuestra Belleza Latina

Born in the town of Azua de Compostela in the Dominican Republic, Francisca filled the Dominican people with pride in 2015 after becoming the first Dominican woman to be crowned Nuestra Belleza Latina.

Before rising to fame, the television host was based in New York City and earned her living as a waitress at a Dominican food restaurant.

In an interview with People en Español in 2016, Francisca confessed that she dreamed of the possibility of succeeding in the United States in order to provide a promising future for her family living in the Dominican Republic.

“God does not put dreams in your head or in your heart that you cannot do. That kept the llama alive and apart from the fact that I always wanted to change my life and that of my family. I wanted that from me there would be a before and after for my family ”, admitted the star in her conversation with People en Español magazine.

Today, Francisca is one of the most representative personalities in the Spanish-speaking television industry in the United States.