Last year, the singer Chyno Miranda surprised his entire audience after learning about the terrible damage that COVID-19 caused him, which caused him serious health problems, which to this day have affected him greatly.

And after staying away from the media, the interpreter of songs like “My pretty girl” decided to make a video to let his audience know how he is emotionally and how his health is, and the clip generated a lot of concern and consternation among the followers of the young Venezuelan.

In the 5-minute video, which Chyno himself shared on his Instagram account, the singer is observed with problems to articulate a clear message, with stereotyped movements and confusion, behaviors that he began to have since he was infected with COVID, as indicated the same.

“My message to you… I needed to speak to you. Here is my message. I love. The Sun will always rise ”, was the comment with which the artist accompanied the video, which is going around the world on social networks, and which has generated pain, due to the harshness with which the young man speaks and shows himself.

“The following material belongs to a part of my story that I call confusion,” reads a separate part of the video, which according to the end, I need 5 hours of recording so that Chyno could finally articulate a clear message.

“After having the Covid I was faced with a peripheral neuropathy, that made me reach the point of not even being able to walk and gave me encephalitis in September 2020”, the singer is heard saying, who is confused and acts in an uncoordinated way . “They were moments of depression, I was very sad.”

The illness he is going through, developed in him confusion in thinking, speech disorder and constant agitation. And in the video he looks in a more deteriorated state of health than a couple of months ago, cunaod even offered an interview talking about the consequences of COVID in him.

Despite his condition, Chyno wanted to speak honestly with his audience and admitted to being very bad.

“This process has been difficult, very difficult really, I want you to know. I am quite hurt (sore), quite dismayed by the whole process and I want my fans to know, here I am with all the love in the world to talk with you and I want you to know the whole reality of the matter and tell you that I am here to give you everything Chyno concluded in the clip, which was recorded on July 13.

Chyno Miranda tells how he lived the disease that paralyzed half of his body | TelemundoDuring an interview with María Celeste Arrarás, Chyno Miranda told about the illness that kept him away from the stage Download our App: telemundo.app.link/8005Db9UP6 SUBSCRIBE: bit.ly/TelemundoYTChannel Telemundo App Telemundo – Full Episodes is your digital destination to enjoy the programming you like! Watch full episodes of your favorite Telemundo shows, television on… 2021-04-05T21: 45: 06Z

After the shocking video, the expressions of affection and support for the singer did not wait and hundreds of fans showed their love and good vibes for his speedy recovery.

“Little brother, strength and forward. No one said it would be easy, but not impossible. Here you have my support. A big hug ”,“ Pa’lante mi pana ”,“ you are going to be victorious ”, and“ God is going to help you ”, were some of the comments shared by the interpreter’s followers.

Warrior from the beginning, and now LEGEND! Your fans love you! I thank you so much for your contribution to us through your music. I am by your side, good and bad! God bless you, ”added another user. 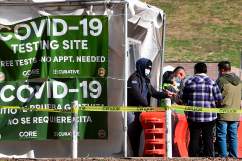