According to information reviewed by Variety magazine, Grace managed to take over the leading role for which talented actresses such as Haley Lu Richardson, Isabela Merced and Zoey Deutch auditioned.

Directors Adil El Arbi and Bilall Fallah, known for being the duo behind the success of “Bad Boys for Life,” will direct the “Batgirl” film, while the script will be written by Christina Hodson (Birds of Prey).

Sources close to the project’s production revealed to Variety that filming is scheduled to begin in November.

The Hollywood Reporter reported that the movie “Batgirl” does not have a scheduled release date, but Warner Bros previously indicated that it could be released on the HBO Max platform in 2023.

Leslie Grace joins the list of actresses with Latin roots who have been selected so far this year to be part of important productions related to the DC Extended Universe, such as Sasha Calle (The Flash) and Rachel Zegler (Shazam! Fury of the Gods). 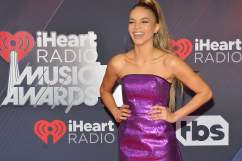 Leslie Grace began her acting career in an American production

Leslie Grace made her debut in the film industry with her participation in the film “In the Heights” which premiered simultaneously in June in major theaters in the United States and on the HBO Max platform.

In the film based on the musical of the same name by Quiara Alegría Hudes and Lin-Manuel Miranda, Grace played the character of Nina Rosario, a very intellectual young woman who sets a precedent in her family by being the first to enter one of the universities. most prestigious in the United States.

In an exclusive interview that she gave to NowMismo in March 2020, the interpreter confessed that she felt blessed by her debut in the film industry: “Nina Rosario was my first challenge as an actress and I feel super blessed to have had that opportunity, to do it with so many people who have been in the industry for a long time ”.

Grace is the daughter of Dominican parents

Born in New York State in 1995, Leslie Grace is a star with Dominican roots who is known to Spanish-speaking audiences for her successful career as a singer.

Grace began her singing career in 2011 after being discovered by famed record producer Sergio George, known for working with artists such as Thalía and Marc Anthony.

The 26-year-old artist has been nominated for a Latin Grammy on three occasions for musical projects such as “Raining Stars,” “Leslie Grace” and “How Silence Hurts.”

Leslie Grace is an exclusive talent of the Sony Music Latin record company, while in her role as an actress she is being represented by the Creative Artists Agency company.

Before entering the acting industry, Grace was part of Univision productions and was an ambassador for important companies such as Colgate.