Rising energy costs have an impact on prices: making a potato omelette today is around 20.48% more expensive than last year

Rising energy costs have an impact on prices: making a potato omelette today is around 20.48% more expensive than last year

The provisional data from INE estimate an annual variation of 3.3% in the August CPI, the highest in the last 9 years

Ingredients of an omelette for four people: half a kilo of potatoes, six eggs, olive oil until the potatoes are covered, salt and, for lovers of discord, half an onion. Estimated preparation time: 30 minutes. Estimated price: at least 20.48% more than last year.

The shopping basket has suffered an exponential increase in the last months of the pandemic. The National Institute of Statistics (INE) published last Monday that the annual variation of the general CPI -the short-term indicator that measures the evolution of consumer goods and services purchased in Spanish households- in August of this year was one 3.3%. An increase in 0.4% compared to the CPI of July this year.

Both data are provisional estimates still pending review, although the communication office of the Institute has advanced that they do not usually vary too much. If confirmed, this will be the biggest rise in the CPI in the last 9 years. This increase goes from the statistics to the kitchen table. Thus, following the INE’s assessments, YesIn July 2020 making an omelette for four cost around 2.05 euros, currently it costs about 2.47 euros. 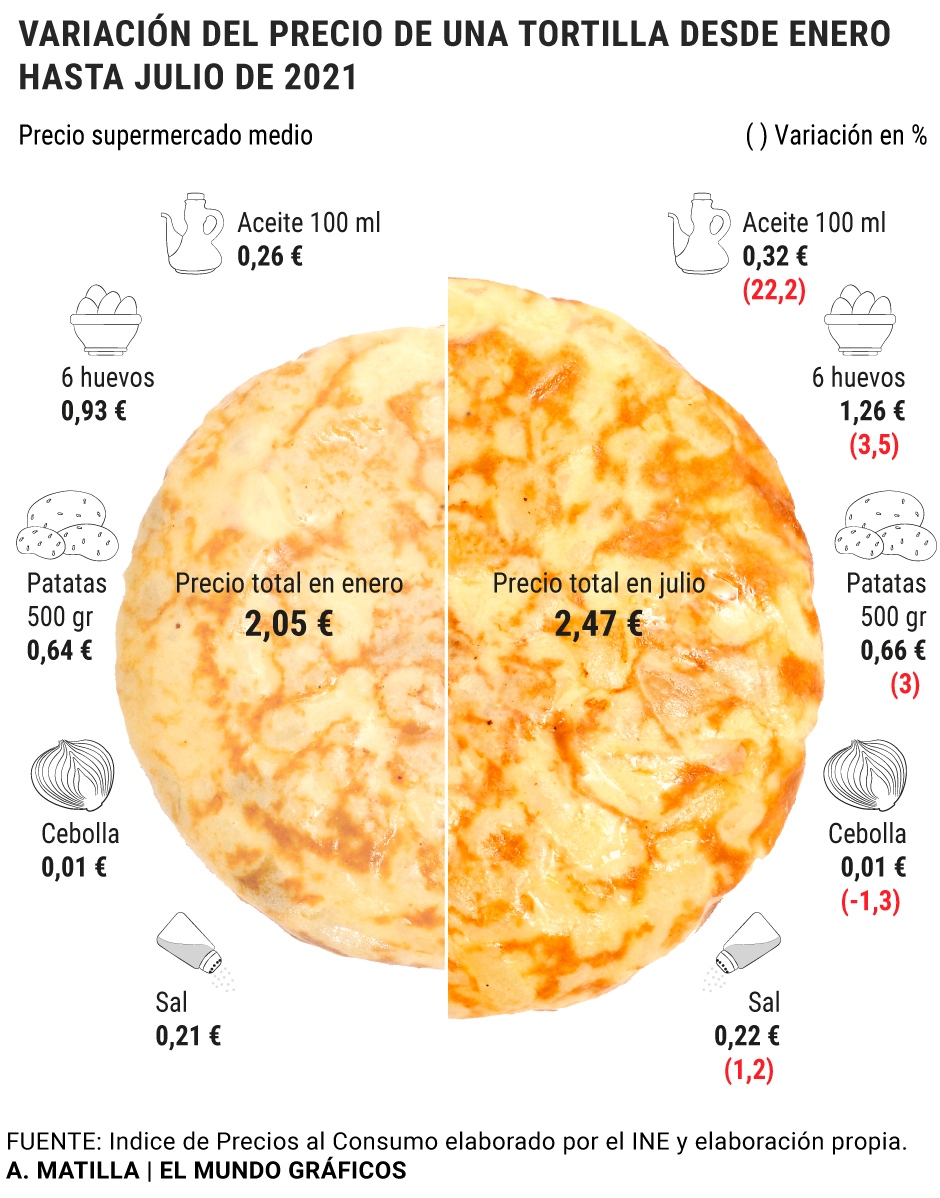 Among the reasons for this increase, the INE highlights “the rise in electricity prices, higher this month than in August of last year.” If consumers are paying the exorbitant rise in the prices of electricity in their homes – which reached a new record yesterday Tuesday with 130 euros per MW / hour– now too they will have to pay it indirectly in their shopping cart. This is a “double bill” for consumers, as described weeks ago Enrique Garca, spokesperson for the Organization of Consumers and Users (OCU), which already last month warned of the impact that the rise in the price of electricity could have on the increase in the price of the shopping basket.

And it is that, as indicated by the consumer association, energy affects the entire production and distribution chain. From the cold rooms that preserve the food to the machinery to process it to the gasoline of the vehicle that transports it. However, not all parts of the chain consider that their role in the final increase in the CPI is the same.

“It is not a question of blaming the oil sector for the increase in the CPI,” he points out. Manuel Alfaro, president of the Spanish Federation of Industrial Olive Oil Manufacturers. The case of oil is exemplary. According to the annual variation of the CPI, oil is one of the products that has undergone the greatest increase in recent months, reaching a annual variation of 21.6% in July of this year. Although, according to Alfaro, “the current price is not the highest compared to previous years”.

“To transform a kilo of olive into oil we need electricity, and due to its increase the costs have increased by around one twenty-one%“. This rise in the chain continues until the arrival of the product to the store. In this sense, Alfaro points out that” also the bottling companies need electricity to bottle the products. “From the Federation they assure that these increased costs have not been passed on to consumers, given that their contracts are for six months and in that period “they establish fixed, closed prices.”

The increase in the CPI is also affected by another phenomenon: that of “crop volatility”, which marks the rise or fall of prices depending on the success of this. Thus, when production exceeds demand – established around 2.8 million tons in the case of oil, according to Alfaro – there is a surplus and prices fall, something that has been happening with the oil harvest in the last years. On the other hand, “this year has not reached those 2.8 million consumed by the world production market, which increases demand and prices,” explains the president of the Federation. Therefore, according to their estimates, in July of last year the price of extra virgin olive oil was at 2’35 euros the liter and today is 3’35 euros approximately.

This price dance between supply and demand, as well as the rise in production and distribution costs related to electricity, affects the sectors with more or less competition unevenly. As Manuel Garca explains, “In an environment where there is competition, it will be more difficult to pass on the rise in prices to the consumer, while in one without competition, this rise will have more impact on consumers “.

In turn, the OCU spokesman adds another explanation to the reasons for the rise in the CPI, and indicates that this “has to do with the recovery expectations“A speculative trend that moves to the sound of demand, reactivated thanks to the return to” normality “post-pandemic. In this sense, it promises light at the end of the tunnel. “Inflation will stabilize as normality in lifestyle stabilizes”.

Whatever the diagnosis, the current rise in prices “has a special impact on the most disadvantaged economies,” reflects Garca. It refers to Four. Five% of the population that, according to their own estimates, has seen their income reduced during the pandemic. “The higher the percentage of their income that they spend on these basic products, the worse they will spend it.”