Brussels changes the labels of the bulbs: which are the best to dodge the light record?

Brussels changes the labels of the bulbs: which are the best to dodge the light record?

The new labeling promoted by the European Commission, aims to simplify and digitize the information on these products

The new one Energy Efficiency Label (EEE) has entered into force for manufacturers and, since September 1, has also been extended to the labeling of light bulbs and light sources. Coinciding with these times in which light exceeds historical limits, the new labeling promoted by the European Commission aims to simplify and digitize the information on these products.

“The Energy Label is a fundamental tool for saving on our daily energy consumption, since it helps consumers to choose the appliance or the light bulb that best suits their needs”, it states Jaime Arbona, director of Selectra.

The energy label indicates the degree of efficiency in consumption of the devices. However, technological advances in recent years have made these increasingly efficient. In this sense, the previous classification system that forced the creation of subcategories, (A, A +, A ++ and A +++), has become obsolete. These are its main changes:

The A is the new D

The new label scale remove sub-classifications with the ‘+’ symbol and exclusively maintains 7 energy efficiency classes. Thus, the new categories remain colored from green to red, and accompanied by a hierarchy by letters the A (best) to G (worst).

“Keep in mind that a light bulb is not what affects you the most on the bill, but you have to understand the labeling because it does mean savings, but a G light bulb is not the same as a G refrigerator”, points out a spokesperson for Selectra . 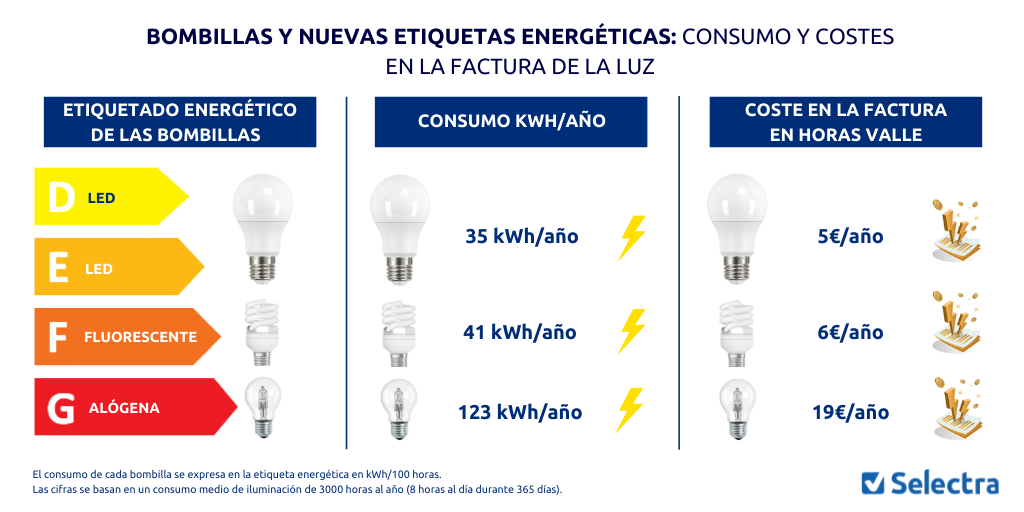 However, when it comes to light bulbs, what was A before, from now on will be D. That is, categories A to C will remain empty until there are new innovations. “This they do from the Commission to force companies to innovate and create increasingly efficient products,” say company sources. In this sense, it will be readjusted periodically every 10 years or when a significant percentage of models fall into the two highest efficiency classes.

“This will be restructured when more efficient bulbs are manufactured than those that exist now, but now there is nothing more efficient than LED and it has to be in D, but it does not mean that it is bad, on the contrary, they are the most efficient that there is. “, they assure from the company.

In that sense the most efficient bulbs on the market today are LEDs (D and E), followed by fluorescent (F), and allogenic (G). “According to estimates by the European Commission, the new energy labels for household appliances and light bulbs could help save 38 TWh / year in 2030, which corresponds to the annual consumption of a country like Hungary,” the company said in a statement.

The new labels will not only show the name, make and model, but will include the energy consumption in kWh per 1000 hours of use and the energy efficiency category of the model. In addition, the new labeling is digitized. From now on, a QR code can be scanned with your smartphone that will allow you to find additional information about the product from the European database of the European Product Registry for Energy Labeling, (EPREL).