A masterpiece worthy of ‘2001’ or an infuriating disappointment: first reviews of ‘Dune’ from Venice

A masterpiece worthy of ‘2001’ or an infuriating disappointment: first reviews of ‘Dune’ from Venice

The Venice festival this year is loaded with film events. It began with an applauded film by Almodóvar, followed by the new Jane Campion, Sorrentino, a praised ‘Spencer’ with Kristen Stewart and also has one of the most anticipated blockbusters of recent years: ‘Dune’, Denis Villeneuve’s attempt to adapt the “inadaptable” (they say) work by Frank Herbert. The first reviews have already been published and come with divided opinions.

Of course, all of them agree on something: Villeneuve’s ‘Dune’ is visually stunning, and a sensory spectacle that makes sense of the big screen. Which, for some, does not compensate for a somewhat hermetic, inaccessible narrative that relies too much on the fact that there could be a second part (the film adapts only the first half of the first book).

For Entertainment Weekly, ‘Dune’ is “impressive, and a little infuriating.”. “A sensory experience so opulent and overwhelming that it begs to be seen on the big screen or not at all,” says the text, lamenting that the story is not so accessible to those who are not fans of Herbert’s work. “The plot is basically a prologue,” he says of a film that needs a second part to make sense.

The Hollywood Reporter agrees that, If you are not very put in the universe of the novel, “the most likely thing is that you will not be very impressed by ‘Dune’. Or that you spend the time wishing that the Atreides house and the Harkonnen house meet in a ball de vogue. “At least the costumes are fine, we suppose.” It does not lack a cinematographic spectacle, from its majestic landscapes to its monumental architecture “, thinks positively, and also has a “charismatic cast”. But for this medium Villeneuve “fails to shape Herbert’s intricate universe so that [la película] be satisfying and digestible. “

In general it has been a very divided reception. IndieWire’s is maybe the most negative criticism, assuring that it is “a huge disappointment”, classifying it as a “lifeless opera”, lamenting its “endless 155 minutes” and adding that “it takes itself too seriously”. In the British The Guardian, however, they give it five stars, and they say that the director of ‘Blade Runner 2049’ “fuses the avant-garde cinema with the commercial to create an epic show of brilliance from another world.” In Variety they fall in the middle: “It is a film that earns five stars for the construction of its universe and two and a half for its narrative”. 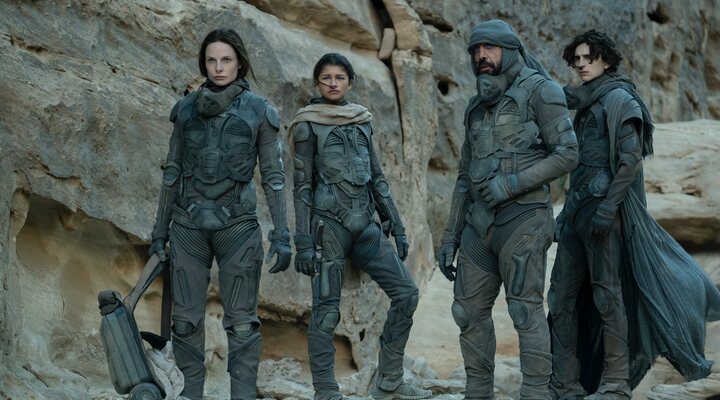 If what you are looking for is opinions without nuances, Twitter is your place. Some of the reactions to the movie starring Timothée Chalamet put ‘Dune’ at the height of ‘The Lord of the Rings’, the first of ‘Star Wars’ and ‘2001: A space odyssey’. According to the “FilmTwitter” community, Villeneuve has built an instant classic above all expectations.

I’ve watched #Dune & it’s among the most immersive moviegoing experiences I’ve ever had w / a sci-fi film. There is masterful filmmaking on display here. When paired w / its big, monstrous sound, the film wondrously transports you to a new, exciting, horrific yet beautiful world pic.twitter.com/Z0oNUJbiNE

“I have seen ‘Dune’ and it is among the most immersive cinematic experiences I have ever had with a science fiction film. Here you see cinema made by a master. When you add its gigantic and monstrous sound, the film beautifully transports you to a new world, exciting, terrifying and beautiful “.

‘Dune’ is ‘Game Thrones’ meets ‘Star Wars’ (the originals). Thoroughly enjoyed it. Visually stunning and more esoteric (in a good way) than most sci-fi blockbusters. It demands to be seen on the big screen. #Dune # Venezia78 pic.twitter.com/49I5je5Bsb

“‘Dune’ is ‘Game of Thrones’ and ‘Star Wars’ (the originals) together. I have thoroughly enjoyed it. It is visually stunning and more esoteric (in a good way) than most sci-fi blockbusters. It needs to be seen. on the big screen “.

DUNE delivers the impossible? an adaptation of Herbert’s novel that understands the themes, the scope and the vision of the source material.

Denis Villeneuve has delivered a pitch perfect epic that DEMANDS Part 2, Zimmer continues to reinvent himself and its visually GORGEOUS. pic.twitter.com/Vbn4lOuf20

“‘Dune’ does the impossible: an adaptation of Herbert’s novel that understands the themes, vision and scope of the original material. Denis Villeneuve has nailed it by building an epic tale that needs a second part, [Hans] Zimmer reinvents himself again and is visually wonderful. “

. @ dunemovie is spectacular. Denis Villeneuve has crafted a visual masterpiece. Greig Fraser’s cinematography is a sight to be seen, simply gorgeous. You can’t take your eyes off the screen. Timothée Chalamet is outstanding. Don’t be surprised by a crafts sweep pic.twitter.com/MDUAWDs3GF

“‘Dune’ is spectacular. Denis VIlleneuve has made a visual masterpiece. Greig Fraser’s photography is a worthwhile image, just gorgeous. You can’t take your eyes off the screen. Timothée Chalamet looks amazing. Don’t be surprised that take all the technical awards. “

I left DUNE shaking. This is how people seeing 2001: A SPACE ODYSSEY back in 1968 for the first time must have felt. The grandeur of this thing is off the charts. However blown away you think you’re going to be, multiply it by ten. # Venezia78

‘I came out of’ Dune ‘shaking. This is how people must have felt who first saw ‘2001: A Space Odyssey’ in 1968. Its grandeur has not been seen before. Anything you think is going to blow your mind, multiply it by 10 “.

#Dune is fantastic. I went in knowing nothing and was completely hypnotized by the strange world. It’s thrilling and emotionally authentic and, I don’t know, it was 8:15 AM in Italy and I was overtired and three espressos in, but I even cried?

“‘Dune’ is fantastic. I walked in without knowing anything and came out completely mesmerized by its strange world. It’s exciting and emotionally authentic and, I don’t know, it was 8:15 in the morning in Italy and I was too tired and I had had three coffees espresso but did I even cry? “

I have experienced #Dune. It’s a once-in-a-generation film, akin to when Lord of the Rings hit the big screen 20 years ago. When it ended I was ready for more

“I have experienced ‘Dune.’

We will have to wait until September 17 to see for ourselves. The script for ‘Dune’ is written by VIlleneuve himself with Jon Spaihts and Eric Roth, and its cast is made up of many people, including: Chalamet, Rebecca Ferguson, Oscar Isaac, Josh Brolin, Stellan Skarsgård, Dave Bautista, Zendaya , Charlotte Rampling, Jason Momoa and Javier Bardem.